There has been a settlement here since at least the Iron Age. Remains of an Iron Age Cliff Fort can be seen on the hill above the house. The fort is thought to be one of only three in Ireland and has been studied by Cork University.

More recently, the land is believed to have been used by the East India Company when they built hulls for their ships. The depth of water wasn’t deep enough for when the hulls were ballasted, but the shallower depth made building the hulls simpler. Old records provide us with a map of the area prior to the building of the Riverbank House. This shows the quay and buildings that were reputedly used by the East India Company as offices.  Even more recently in 1840, Clifford House (later renamed Riverbank House), was built by Robert Edwardes on land that was leased from the landed Protestant landlord, Mr. Roland Frewin. At the time, Robert Edwardes was a coal merchant in Bandon (on the site of the present Bank of Ireland). His main franchise was the supply of coal to the West Cork Railway Company. With the building of Riverbank House, he was able to land coal and store it in one location prior to transporting by road to the railway company and other customers. Before that he had used Colliers quay located slightly downstream of Riverbank House quay.

As part of the lease from Mr. Roland Frewin, Robert Edwardes rented 16 acres of land near Colliers Quay. Although there were buildings on the land he decided to improve and built Riverbank house and coal store at a cost of c.£1500.  Buildings still existed on the land that Robert Edwardes leased and there are some of the ruins are still visible today. The most notable is thought to date from the 17th century and is located at a slightly higher elevation than Riverbank House. It was split into two halves, one half for the dwelling house, and the other for housing animals. It is thought that the Edwardes family would have lived in this house while Clifford House was being built. The water supply for the house came from the stream and was delivered by a hydraulic ram pump, which would only have operated when the stream was in full flow. For this reason a water storage tank was installed on the North side of the building. The photograph from 1993, shows the building, which was in reasonable order until 2002 when sadly the front wall collapsed. Since then it has deteriorated badly and is now in a ruined state. Although the picture shows a corrugated iron roof, broken slates have been found at the back of the house, which would indicate that it was originally slated. 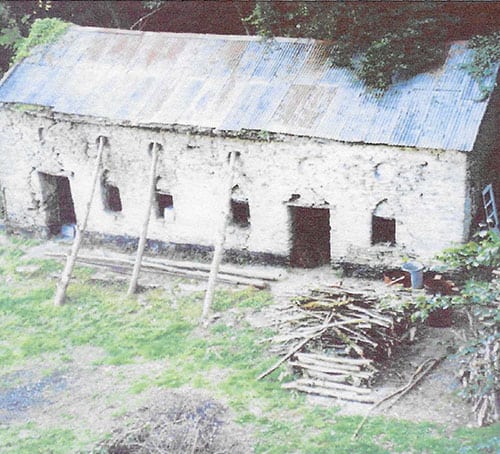 From an old Ordnance Survey map, the building can be seen in relation to Riverbank House. Interestingly, on the same map, evidence of the original cobbled yard and small out-buildings to the front of Riverbank House can be seen.

Robert Edwardes business prospered and he became a wealthy merchant, employing many men throughout West Cork. Then the famine years struck and his fortunes turned. In the 1870’s, his landlord sued for back rent. Mr Edwardes and his family were to be evicted. However, the local people appealed to the court, in recognition of the support he had given them during the famine years, by providing work such as the noted famine walls, and by his wife’s support to hungry families in the area, even though they were also in dire straits. 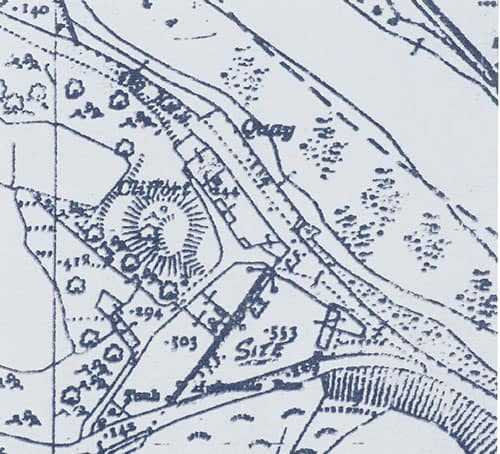 In the mid 20th Century, Clifford House was bought by Flight Lieutenant George Allison who renamed it Riverbank House, and opened up a fishing lodge and bar. Flt Lt Allison had previously been the personal pilot for Winston Churchill and for the owner of the Guinness Company. Neighbours tell us that it was common for the local lads to congregate at Billy the Blacksmith’s forge (where the statue of the Billy is at the turn off to the N71), and have a few drinks there as the forge cooled, and then head down to Riverbank for a few more drinks and a game on the only one armed bandit in West Cork. The photograph below shows George Allison (far right) with his housekeeper Maisie (second left) and gardener /handyman Mr. Nolan (far left). 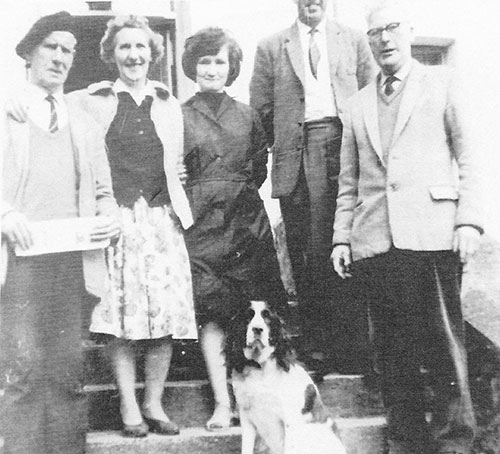 Subsequent to being a hotel, Riverbank house has been a restaurant, bar (with disco on the ground floor!) and most latterly, a family home.
We have only been here for a very small portion of its history, but we hope that in restoring Riverbank House, we can bring back the tradition of welcoming guests and creating fond memories. 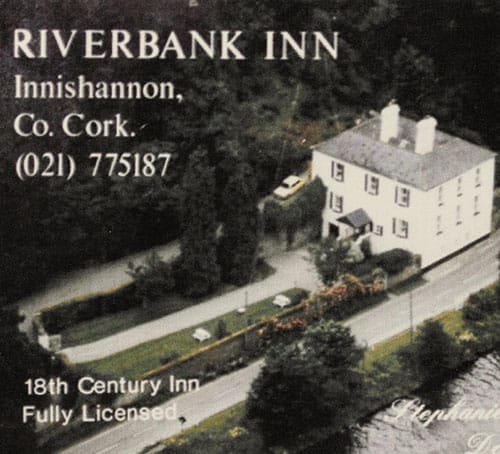 BE UPDATED WITH US

We use cookies on our website to give you the most relevant experience by remembering your preferences and repeat visits. By clicking “Accept”, you consent to the use of ALL the cookies.
Cookie settingsACCEPT
Manage consent

This website uses cookies to improve your experience while you navigate through the website. Out of these, the cookies that are categorized as necessary are stored on your browser as they are essential for the working of basic functionalities of the website. We also use third-party cookies that help us analyze and understand how you use this website. These cookies will be stored in your browser only with your consent. You also have the option to opt-out of these cookies. But opting out of some of these cookies may affect your browsing experience.
Necessary Always Enabled
Necessary cookies are absolutely essential for the website to function properly. These cookies ensure basic functionalities and security features of the website, anonymously.
Functional
Functional cookies help to perform certain functionalities like sharing the content of the website on social media platforms, collect feedbacks, and other third-party features.
Performance
Performance cookies are used to understand and analyze the key performance indexes of the website which helps in delivering a better user experience for the visitors.
Analytics
Analytical cookies are used to understand how visitors interact with the website. These cookies help provide information on metrics the number of visitors, bounce rate, traffic source, etc.
Advertisement
Advertisement cookies are used to provide visitors with relevant ads and marketing campaigns. These cookies track visitors across websites and collect information to provide customized ads.
Others
Other uncategorized cookies are those that are being analyzed and have not been classified into a category as yet.
SAVE & ACCEPT